All demo content is for sample purposes only, intended to represent a live site. Please use the RocketLauncher to install an equivalent of the demo, all images will be replaced with sample images. 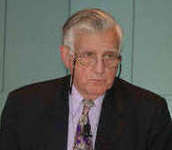 In May 2005 Ian was presented with an award for his outstanding contributions to capital markets analysis. There had been many accolades over the years but this one was special. The presentation was hosted by the Market Technicians Association (MTA) over a sumptuous dinner at the downtown Manhattan Ritz Carlton and was well attended by a great many of his admirers, analytical devotees, and friends. They came from far and wide. Many of course were local. A good number came from Canada, California and Europe.

When it came time, Ian, sitting at the head of his table, one by one called on various attendees to present their encomiums. He sat, calling out our names as if it had been a rehearsed event. He was basking in the moment. When it came my turn, I said that I felt I had been given the chance to stand on the shoulders of a giant. And the view was wonderful. There is no “immaculate conception”; all ideas spring from other ideas. And what an endless stream of thoughts and cogitation this work has engendered. Ian was always pushing, always moving forward, and always full of new ideas for the business. Right up to the end. Alas, he just ran out of time.

Ian McAvity, a long time friend and associate has written some wonderful comments and I wish to share them with you.

It seems proper to have a good exposition of a wonderful career. To many it will be a pleasant reminder of all the years gone by. To newer enthusiasts it will be a fascinating history of a man and an analytical craft as it grew from an infancy, weathered violent market storms, was improved by the computer and technology revolution and evolved to its current state. The data tells the story. The markets will always be there. New mechanisms for massaging the data and delivering information will always evolve and a new one is due out from us soon but it is the techniques that survive and still remain applicable that really matter.

In 1973, I was writing Deliberations, the newsletter, for the institutional boutique, Draper Dobie & Co, in Toronto, where we had the first privately owned computer system dedicated to streaming stock exchange data. The Chairman of the firm, David Knight was an avid chartist, and fully supportive of anything in pursuit of data that Tony Lash and his crew could generate from those machines. Those machines provided the original stock quotes that appeared on Canadian cable TV for Rogers.

It seems so simple now, but it was a Eureka moment back then to suggest that maybe prices that were down should be shown in red, green for up, and yellow for unchanged. That was 1974...

On a visit to his mining empire interests in Australia, David Knight discovered that a newly acquired subsidiary included a fellow by the name of Ian Notley who had traded greasy wool futures on the floor in Sydney, and was teaching technical analysis at night.

David called from Sydney with the suggestion that Ian should come up to visit in Toronto and see if we might work together to build on the massive amount of data our computers were generating. It was a great fit, and we quickly discovered the joys of having a machine calculate Coppock curves on a daily, weekly, monthly, quarterly and annual basis to illustrate various cycles. We had both been laboriously calculating them by hand on nearly identical worksheets we had independently designed on 11x17 inch paper, drawn from Sedge’s original Barron’s article back in 1961.

We quickly discovered that we were both “data packrats” with a bent for market history, who shared an international perspective on markets that was quite unique in those days. Apart from Bank Credit Analyst, I don’t think there was another newsletter in North America that included charts of London’s old FT-30 and Tokyo, along with TSE and NY charts. On that theme, I showed him my theory of Canada lagging the US market at cycle turns that was later published in Barron’s in 1976, and he showed me work he had done showing that when the Brits came storming into Aussie markets, that was the last fling of the cycle. That resource markets tend to be cycle laggards has subsequently become rather well known from that birthing process in Toronto 35 years ago.

He went back to Australia after several months in Toronto, to marry Pat, and then moved to Toronto permanently. (After a few too many cold Toronto winters, Pat laid down the law and they moved to the slightly warmer climate of the US, ending up in Connecticut years later.)

I left Draper Dobie in late 1974 to go out on my own with Deliberations, and Ian stayed on to create what became known as the Trend & Cycle Department, greatly increasing the volume of his printed output, and the firm assigned a full-time sales rep, Don Sheppard, to market Ian’s work institutionally. Many years later John Brooks, and then Jonathan Arter came on board to market his work, along with a European network he had developed.

Draper Dobie ended up as part of Dominion Securities, and later on RBC acquired DS. In the later 1980’s, Ian went out on his own, forming Yelton Fiscal to become an independent research provider.

Ian was the most dedicated data bug I’ve known, (with John Carder a serious rival), long before the internet and assorted data services evolved to make it relatively easier to track down anything anywhere. From the Draper Dobie days and the Tony Lash computer crew, he learned early on that you hire the best qualified technical support, and keep them inspired, which he did all the way along. If he heard of a market related number that existed, his staff would track it down and maintain it.

He was tireless in his supporting role as a founder of the CSTA, and IFTA. The Walkabout session of round tables with dedicated topics as a brilliant ice-breaker at the start of every conference was his unique creation.

At the IFTA Conference in Sharm El-Sheik, Egypt last November, he presided over his final walkabout, and also drafted me at the last minute for a closing panel session with Robin Griffiths & Martin Pring to bring “the two Ian’s” back together on a stage one last time. Sadly it was to be his final appearance, but in conversations we had there and over a subsequent lunch in Toronto, I know he really enjoyed it and was terribly proud of how IFTA had evolved. Knowing that his end was in sight, he outlined his succession plans to me, to make sure that his data base and his work would be carried on, and I’m sure it will be, very successfully.

The world of TA is a richer place for the unrelenting dedication Ian contributed to our field.

35 years later, it just doesn’t feel like 1973 was all that long ago, but all those years makes it even more difficult to have to say Good bye to an old friend who’s contributions will live on and on.

I started with Ian back in early 1992, some six or more months before John Brooks arrived. I had always wanted to meet the people who were the great contributors to our craft. I had worked with Dick Arms for several years but that was out in the hinterland of New Mexico. I didn’t get to travel much to New York but in 1987 - just before the crash - I went with a purpose of meeting as many people in the field as possible. I started with Ralph Acampora who was so energetic and encouraging. He packed me off to visit Alan Shaw, Bob Farrell, and many of the others. I went to Boston but not Toronto and not Atlanta. It would be another four to five years before I would meet Ian Notley and later John Brooks. They both became great friends and mentors. John, sharing and relating to me all his on-the-street, ground level smarts and of course endless jokes and stories; Ian, pouring into me all his knowledge and depth working as we did literally elbow to elbow through many long nights in my early years with him as Executive Analyst when we were operating out of a shoe box of an office. You never get tired of it. The markets always manage to throw you twists and curve balls; usually when you most think you have a handle on it.

I am glad to have been able to meet so many great thinkers in this business. A client of ours who was one of George Soros’ four personal funds managers came to visit after the tech debacle in 2000. He came to thank us for helping him dodge the bullet of over enthusiastic technology investing. He said to me at a lunch that the great thing about this business is that you get to deal with so many bright and interesting people, because the others don’t survive. I think that is about right. With a lot of effort and a bit of luck just maybe there will be a lot of new interesting people yet to meet.